Not much sewing going on here this weekend! Our nephew, Stewart spent the weekend with us and Saturday morning we had to have him at the baseball field at 830am. UGH!

Stewart did really well! He got a hit and scored! This is his first year playing baseball. Andy and I thought the coach was a big jerk! He was yelling and screaming and these kids are 7 & 8 years old! I was glad when the game was over.

After baseball, we grabbed Chickfila and then went to Cade's karate graduation. He is a brown/black belt, the last belt before BLACK! This graduation was almost 2 hours long:( and it was hot:( Here is Cade doing some of his kicks. I was hoping to get a pic of the lady in the red shirt, left corner of the picture. Everybody around us was pretty sure that she was drunk. Maybe she had just had a bad night. 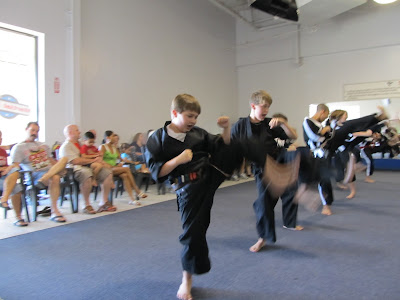 Here is Cade and Stewart after the grauation. Cade was so sweaty! 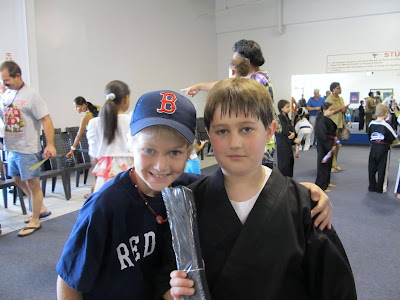 This is Cade and his buddy Luke. Cade and Luke started karate at the same time. Whenever they perform they stand beside each other and do their moves exactly together. Makes them look really good! Poor Cade, Luke is almost 2 years younger than Cade! Cade is just a shorty! 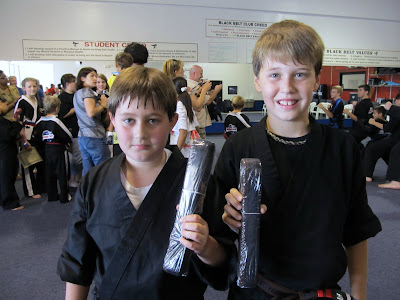 They are holding their new belts. They start training for their black belts this week!

Hope that you all had nice weekends!

I finished my doll!! I made her a little dress and shoes! I can find 50 (atleast) things wrong with her, if I stare at her long enough. BUT, I'm not going to! I made my daughter a doll and it's as cute as can be! 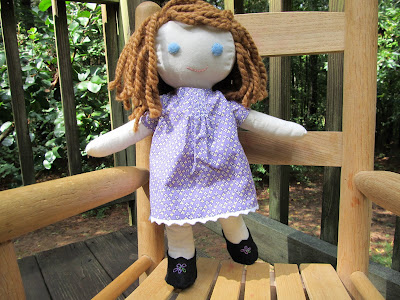 Check out her shoes! 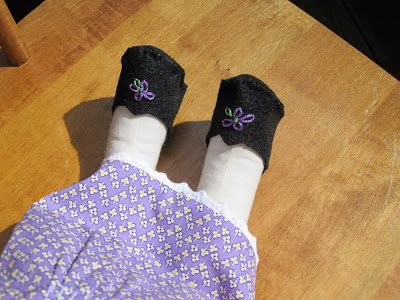 I used this great Wee Wonderful pattern. I have never made a doll before and besides sewing quilts, I don't have much sewing experience at all. I think Hillary made a great pattern that anyone that knows how to do basic sewing can achieve good results! I would love to make a couple more of these sweet dolls!
Posted by Libby at 11:53 AM 3 comments:

This Is Only A Test

I have always wanted to make a doll for my daughter. My Kelsey is turning 21 in a few days so I am running out of time;)

Instead of spending my free day cleaning house, I dug out my pattern by Hillary Lang of Wee Wonderfuls. I used the Kit, Chloe and Louise pattern. I love Hillary's work and I have always wanted to make one of these dolls but have been too afraid! Mine is not as nice as the ones on Flickr but I don't hate it. 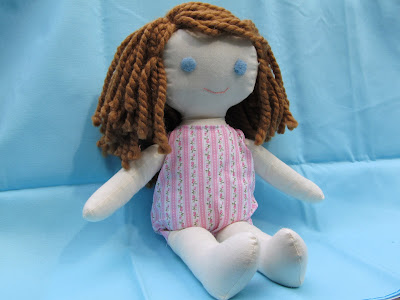 So, what do you think? Please, ignore my dumb "photo shoot" I'm iffy about the hair and one of the eyes. I am proud of the doll body! She does need a dress and some shoes! I am soooo bad at sewing any kind of garment..I am afraid that 'Little Kelsey' may have to go out in just her underthings!
Posted by Libby at 3:28 PM 4 comments:

I did participate in Friday Night Sew In. I just didnt blog about it! I prepped some more of the applique blocks that I have been doing. I fell in love with Amanda Jean's quilt!. I worked on my applique at Saturday Sewing at our church. This is what I have so far. I am just placing them on my design wall as I go...probably not my final design. 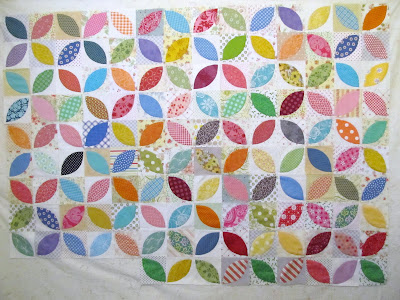 I also wanted to show this DARLING piece of calico fabric that my sweet friend Terri gave to me. Terri had it with her at Sat, Sewing and I fell in love with it. She had bought it at a yard sale of someone that was selling their elderly Mom's stash. I asked Terri for a scrap of it (I did think about stealing it) and she gave me the whole piece!! It is 9 1/2 inches wide and almost 3 yards long. I plan on cutting some for my applique blocks! I wish you could see it in person..it is so sweet with the little robin's egg blue flowers and the pink!! Love it! 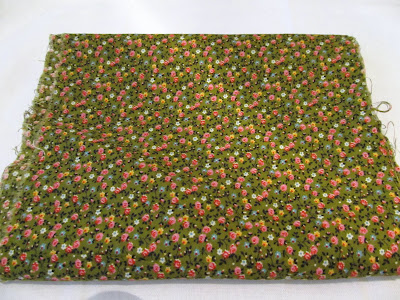 Ok. I have to get on the ball today! Catching up for the weekend. We drove down to see Kelsey and had so much fun!! We saw her room, walked around the beautiful campus, ate Chinese food and fro-yo;) We also did a little shopping! and Good Momma here forgot her camera:)

So now I have to do some cleaning and run to the grocery store:( Cade has karate testing tonight..his last test before he starts his Black Belt training!

Please tell me that I am not the only person that makes such a huge mess when "working" on a project???

This is out of control! I don't know how this happened! I am a very orderly girl that likes everything clean and in it's place...but let me start to plan a project and I am like The Incredible Hulk, smashing and pulling and yanking on some fabric!! 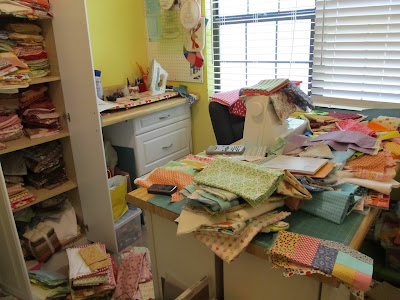 We have our annual church craft auction (for charity) coming up and I am thinking about making one of these Surely, such a small project does not warrant this mess:( tsk tsk

What are you doing this Friday night? Nothing? Good! Go on over to Heidi's Blog and sign up for Friday Night Sew In! I will be prepping applique blocks to take to Saturday Sewing at our church!

Now, I have brownies in the oven and the timer just went off! Yummmy! Perfect timing!

Look at this sweet snack mat! I can't believe that I made it! I take (still) such terrible pictures, and this one doesnt do this cute mat justice!..if I do say so myself;) 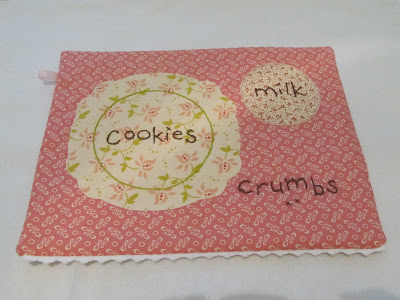 I followed the awesome tutorial found here at nanaCompany. I love Amy's blog...go over there and look at the sweet stuff that she makes! Plus, she has such cute cute kids!
Posted by Libby at 2:34 PM 4 comments:

This week as really gone by fast! I guess it's because we had Labor Day off from school. Me, Andy, Kelsey and Cade all joined family at Andy's mothers house for Labor Day. It was good to get together, play with the 2 babies and eat;) I took some pictures but Blogger will only let me load 5 pics. We had bad storms from Tropical Storm Lee move in too. Thankfully, we got some needed rain and some cooler temps!! We have been in the 70's all week! So nice!

As you can see from this mess, I am still working hard on my applique. I am to the point were I need to figure out what size that I want this quilt to be. It is alot of work but it would be a shame not to make it bed-sized. Around here, any quilt that isnt on a bed gets folded and put up and nobody really enjoys it. 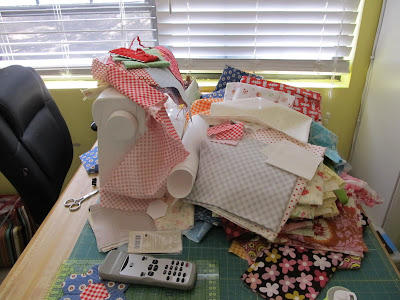 I have a nice stack of blocks! I still enjoy making these! 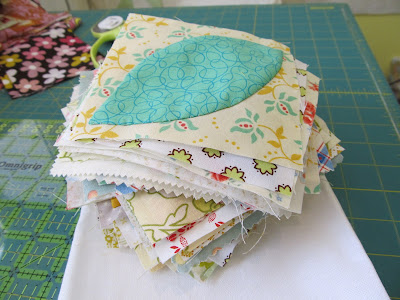 Hmmm...when I lay them out, it looks like I have a long way to go before this quilt is bed-sized. 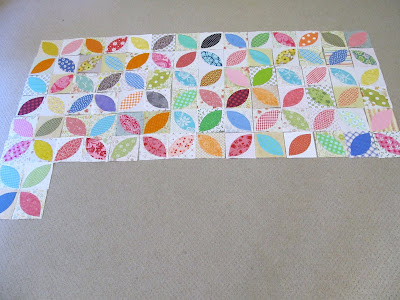 I went to the LQS and bought a set of Hexagon papers. I have never made a hexagon block before. The only hexagon quilt that I know of is the Grandmother's Flower Garden. Now days, you see people just piecing the "hexies" together to make quilts and all sorts of things. I have been thinking about giving embroidered dish-towels for Christmas. I saw the hexagon papers and thought a hexie would be cute on a towel. Plus I could learn a new skill! 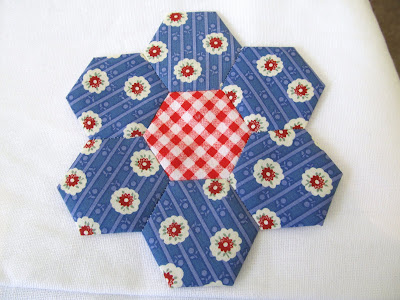 This is what I am thinking about for the dish-towel. What do you think? Too small? 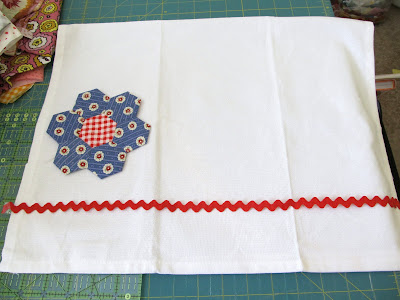 Tonight, Cade is going to a friends house, so I am making homemade chicken salad for me and Andy. We will have a quiet night in front of the tv...that means he will fall asleep and I will do my applique!

...Yet! Here is my progress on my applique blocks. You can see who I am copying:) here.

The first day I loved doing applique! The 2nd day I hated everything about it but I kept at it! I am really enjoying the process now. My blocks are nowhere near even close to perfect. My points arent even what you would call pointy;) but I am liking how they are turning out and I feel more confident. I guess, like most things with sewing, it takes practice, practice and more practice! 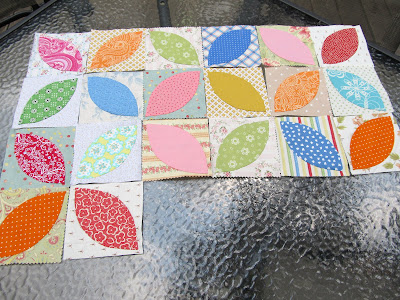 2 of my favorite blocks. 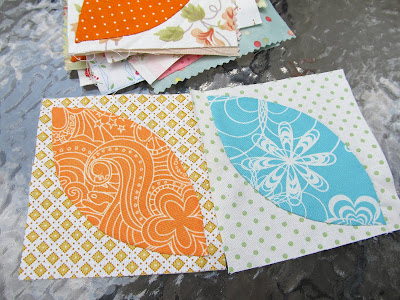 I found this great tutorial. It helped alot. I love the smell of starch..and its so cheap! 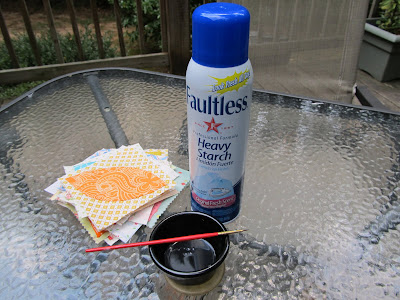 I also made these blocks to send off to Bren. To help out a sweet girl. 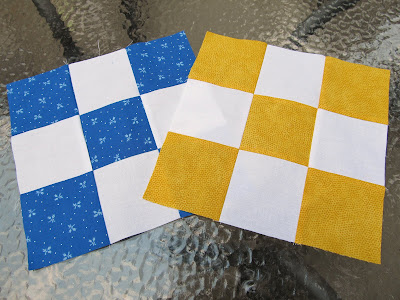 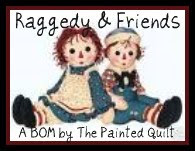 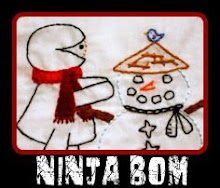